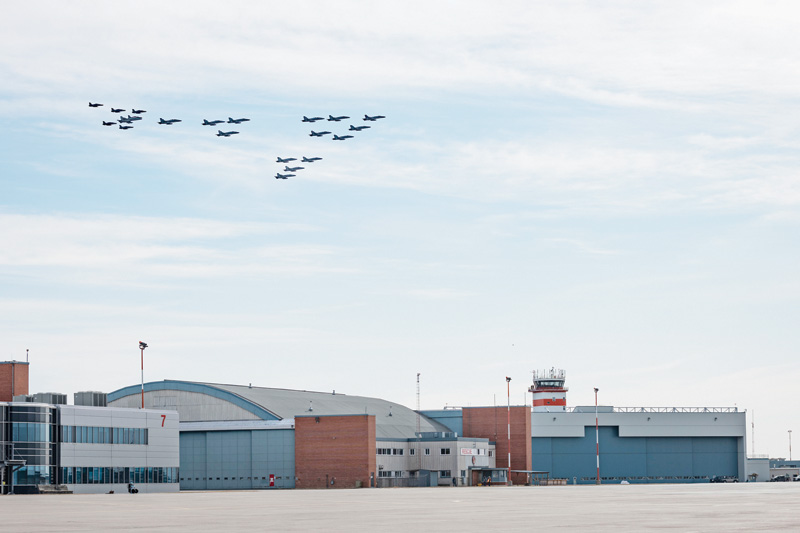 Personnel and even the aircraft involved in last Wednesday’s flypast, commemorating the 97th birthday of the Royal Canadian Air Force, observed all the safety protocols.

Twenty-one jets zoomed over ice-covered Cold Lake, passing over the marina and Cold Lake South before returning to the base. (The pilots all had their masks on, and the aircraft were no closer than six feet wingtip-to-wingtip!)

The flypast was a celebration of the RCAF’s birthday and a tribute to the public, especially the healthcare workers who have made an extraordinary effort through the Covid-19 pandemic.

Tradition and ceremony are important to the RCAF, and much of that has been curtailed over the past year. Lieutenant-Colonel Colin Marks, commanding officer of 409 Tactical Fighter Squadron at 4 Wing Cold Lake, said “many of the
events that we would traditionally conduct for the RCAF’s birthday—mess dinners, parades, social events and gatherings—have been cancelled so we can observe the preventative health measures that help protect
and preserve our force capability,” he said.

“So we took this on as an opportunity to hopefully boost morale a little bit on the Wing and in the city of Cold Lake.”

Marks said close formation flying is an important part of fighter operations, so the flypast was also an opportunity to train. And, he said, it was special for both the senior and the less-experienced pilots.

“We got some really excellent training done, and it was a lot of fun,” he said. “I don’t think I’ve ever taken part in a formation that large before for a flypast, and I’m at the end of my flying career.

“There were some old guys like me out there who probably haven’t done many of these. And then it was all the way down to the brand-newest fighter pilot on our squadron was out there today flying as well.

“So it’s important, it’s critical training that we need to get done. And we were able to do it from all levels of experience, from the commanders all the way down to the newest fighter pilot on the squadron. It was a lot of fun.”

The RCAF was officially established on April 1, 1924. Marks said the 97 years of RCAF tradition, and the history of Canadian military flying that predates the RCAF, are an important part of the ethos and culture that guide its members today.

“It’s such a proud and rich history, it really is amazing to see how far we’ve come. From a fledgling force in the Great War with aces like Barker, Bishop and McLeod flying early Sopwith fighters, the RCAF developed into a major fighting force in the Second World War with heroes like 401 Squadron’s Scotty Falconer, and 419 Squadron’s Andrew Mynarski—flying Spitfires and Hurricanes fighters and Lancaster bombers, among many others,” he said.

And while the public sees the aircraft in flight, Marks said the RCAF tradition extends to the many men and women that make operations possible.

“You can see even now in pandemic times when things are tough, the men and women that work on the floor every day turning the wrenches are just doing outstanding work,  and they’re able to use that culture and keep things sharp at the leading edge.”

And in keeping with the theme of the flypast, he extended a tribute to healthcare workers, military and civilian.

“Today was a fantastic opportunity to conduct Wing level fighter training, to boost morale, and to show our appreciation for the City of Cold Lake and our local healthcare workers. The RCAF would not be in a position to protect Canada if our health care workers were not doing so much to protect us all,” he said.